Before Worlds 2018, support decks and upgrade decks had largely been kept separate. Then the Hyperloops brought out Drive By Shooting, a deck that combined the most efficient vehicles with the most efficient upgrades. Since then, support decks have continued to sprinkle in powerful upgrades (like Handheld Cannon), understanding that the more above the curve cards you can include in your deck, the better. As I’ve been theory crafting Convergence, I’ve noticed that my Middle/Middle decks have trended in a similar direction – they all seemed to be including Megablaster Troopers. We’ve reached a point where a number of the most efficient cards are supports and the pool of good upgrades is shallow. So my thesis is this – for Middle/Middle decks to rise to the top in the current meta, they need to find ways to include powerful supports, while still operating in a way that is different from the traditional 3-wide ramp support decks. The following are 3 examples of how this can be done. 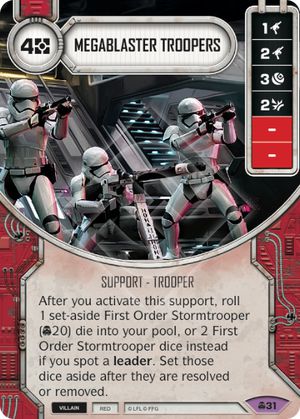 END_OF_DOCUMENT_TOKEN_TO_BE_REPLACED

In this edition of Magnuson madness we’ll be examining the hero version of the Palp deck (infinite upgrades +Bacta + Fatal Blow).  How do you get infinite upgrades in Hero you ask?  Let me introduce you to my little friend: Custom Bandoliers.  These guys are actually useful, given the right deck.  What is this right deck? Mace Satine Built to Last.  Yah yah, go ahead, laugh all you want, this deck is actually legit (somehow), and I recently took first place at a 24 person, cut to top 4 (with best of 3s) local MN tournament (shout out to Michael and Bowie who run the Twin Suns Cup tournaments).  So lets go ahead and take a dive into the madness of a Magnuson deck build.

END_OF_DOCUMENT_TOKEN_TO_BE_REPLACED

In a world in which Destiny has become saturated with amazing supports like Vader’s Fist, Megablaster Troopers, and Entourage, slow support decks have become the norm. How do faster 2-wide decks compete in this kind of meta? One of the most important ways a faster deck can gain an advantage over slow support decks is by abusing a powerful battlefield. In the past, battlefields like Frozen Wastes and Emperor’s Throne Room have been some of the few that gave fast decks a distinct advantage. With those battlefields rotating, where can we turn going forward? The answer, I think, is Mean Streets.

END_OF_DOCUMENT_TOKEN_TO_BE_REPLACED

Okay so today’s many updates has so many interesting tid bits we could talk about, but for now I’m going to focus on just one: 2 Player Phasma getting Leader and Trooper added.  This is actually huge for the character.  While it remains to be seen if aggro decks can truly stand up to the dominant support decks, Phasma may be in the first set of decks to make a decent attempt at it.  Why is she so good now?  She’s gone from being a solid die character in a terrible color/allegiance to being in perhaps the best color and allegiance with the BEST SUBTYPES as well. 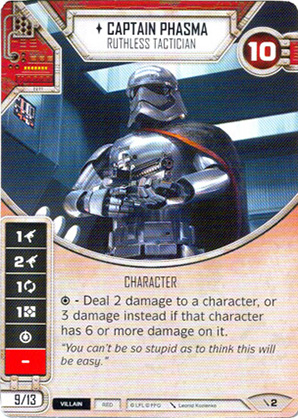