On this weeks installment of Magnuson Madness, we observe a , , probably weak ??? lineup… with one twist.  This deck will snowball like no other deck can.  We’ll be taking a look at a double Executioners, Dengar, Armored Reinforcement for Punishing One deck.  When this deck kills something, all hell breaks loose, as not only will you collect bounties, but you’ll be rolling in plenty of extra dice to keep that snowball rolling!

END_OF_DOCUMENT_TOKEN_TO_BE_REPLACED

Normally I, (Jon), do not enjoy playing Kylo.  While some may argue that there is skill in calling the right color (there’s a bit), you can’t get around the fact it’s a very coin-flippy interaction.  At least with dice you have the option to re-roll, with Kylo, its a one and done coin flip.  I tend to hate to play decks that rely on such mechanics as I like to know what’s going to happen before I make a choice… not after.  This is why I enjoyed decks like Thrawn Talzin and 5 die Talzin.  But for whatever reason, I ended up playing Kylo at not 1, but 2 regionals this year. I did end up with rather spicy lists though, so I thought I’d share them with you all today. 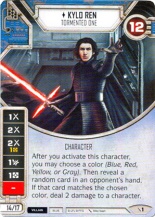 END_OF_DOCUMENT_TOKEN_TO_BE_REPLACED

Today we’re going to enter the realm of theory crafting.  A realm in which we can observe random interactions and ideas without any care for whether or not these interactions are actually going to be competitive.  This late in a meta, deck builders need to constantly be observing cards from strange new angles if they hope to discover anything new, as most (not all) of the obvious powerful interactions have already been found.  What are we observing today?  The fact that new Qui-Gon’s passive should actually be more effective with 1 drops than with the more traditional hero blue weapons that cost 2+. 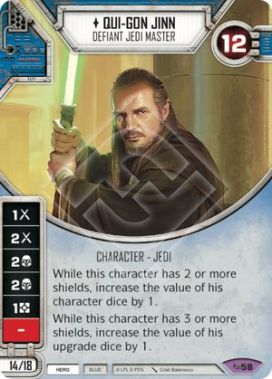 END_OF_DOCUMENT_TOKEN_TO_BE_REPLACED

While Yoda Cassian quickly popped up as an extremely fast mill deck, it took time for people to consider the fact that it could also deal damage.  We’ve been keeping this deck in the background for awhile now, as the Council was considering bringing it to Gen Con.  And indeed, Will, Andrew, and Brian all brought Yoda Cassian damage, even Brian’s brother Russel brought the deck.  Andrew and Brian both made top 16, while Will and Russel ended day one at 5-3, narrowly missing the 6-2 cut. So what is it that made us want to play the deck? Let’s find out.