Today we’ll be taking a look at the deck that took two of our team, Andrew and I, to top 4 finishes at Gen Con. While many people hyped droids leading up to Gen Con, the main variants in discussion were Satine and Han.  Sure, people knew Chopper existed, but most didn’t consider a Chopper version worth testing in a gauntlet when you’re already testing the 2 “best” variants of droids.  The Council, on the other hand, had to deal with a young punk kicking our butts with Chopper droids in testing. (Michael Berg is a local who play tested with us going into Gen Con, he took Chopper to a 4-4 at his first major event!).  We literally couldn’t ignore the deck, and while it took us long enough, we eventually had to accept that Chopper droids was freaking good, and worth considering for Gen Con.  Hopefully this article sheds some light on how to play the deck, and why it can be so good at times. 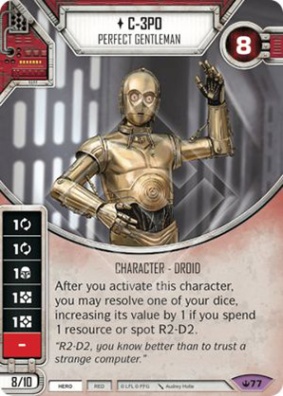 Deciding on a Deck

Going into Gen Con I was in 100% panic mode, the deck archetype I’d been playing for 2 months was looking more and more unplayable (AR for 6 cost Falcon).  I denied it for the longest time, and was even able to take it to a 7-0 victory at GDI, but I eventually had to accept that desperate measures and the disrupt of droids was simply too much for the deck. Oh, and I made this decision the Saturday before Gen Con… so I had all of 5 days to figure out what on earth I would end up playing.  I’d seen just what the disrupt of Chopper droids could do to my deck, so I decided to try out the deck myself, and man did it crush.  It felt insanely good, although with a weak-ish match-up into Han droids. That weak match-up made me second guess my decision over and over, but eventually the shear fun of Chopper led to me playing the deck.  (Side note, Andrew also didn’t pick up the deck until that Saturday… he didn’t even sign up for Gen Con until a couple weeks beforehand.)

The first fact people need to understand is that contrary to popular belief, this is NOT aggro droids. The reason you’re running 7 action cheats, instead of say 4 or 5, is to guarantee the round 1 double disrupt, not for crazy damage plays (although that definitely does happen). Han Droids is actually much better at putting out pure aggression.  Chopper on the other hand is all about disrupting your opponents game plan rounds 1 and 2 while also spiking a character.  The combination of killing a character and also slowing down their round 1 game plan with disrupt plays sets your opponent incredibly far behind, and this leads to game wins.  However, some games can take the deck much longer to get that early kill, and those games can become long and drawn out.  I had several games over the course of the tournament that hit the 6-7 round mark.  Understand that if you go out and pump only damage sides, you’re going to lose many games you should have won.  The deck loses much of its damage if and when you lose your first character, and all of your characters are 8 hp, so if you aren’t disrupting your opponent, you’ll lose R2 or Chopper way too early and thus lose the game.  A huge part of playing the deck is deciding when you need to disrupt, discard, shield, or simply pump damage.  The deck is incredibly versatile, and this gives skilled players a huge leg up, and it’s the true reason to run Chopper droids.

The Upgrades (and Fickle) 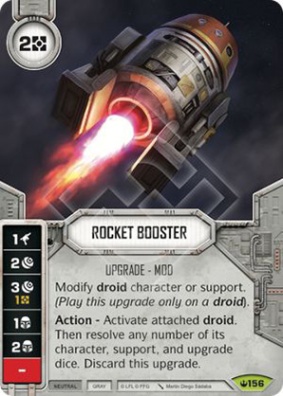 The upgrade choices are extremely simple, toss in the 6 relevant mods for Chopper, and a couple solid redeploys in Ezras and Dagger.  It’s worth noting that while I dislike the expense of a 3 cost upgrade, it felt incredibly good into Reylo so I couldn’t bring myself to cut Dagger from the list.  Fickles was literally a last minute decision, the shield match-ups could get rough, so I decided to toss in (with encouragement from my team) the Fickles as they are simply the cheapest way to add solid damage. I ran them in the tournament without ever having played the cards in the list (I might? have run Fickles in a play test game the night before but I don’t think I did).  In any case, Salvaged Arm is definitely the MVP.  The pump on Choppers dice is incredible.  Being able to double/triple disrupt or discard, or simply pump extra damage / resources gives you nearly infinite possibilities for controlling your opponent or progressing your game plan.  Additionally, the card can get really out of hand when you begin to cycle it by using it, overwriting, PA it back, then using it again.  No other card is better to have in your opening hand. 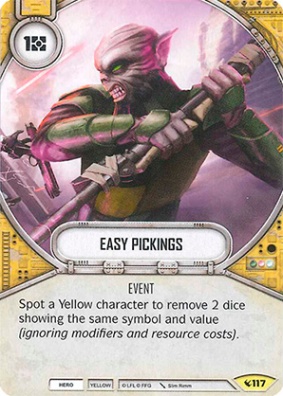 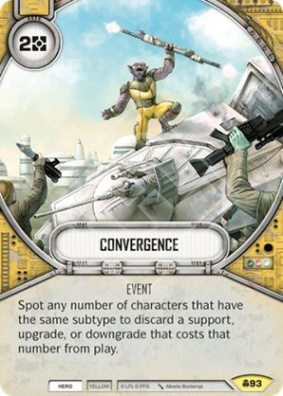 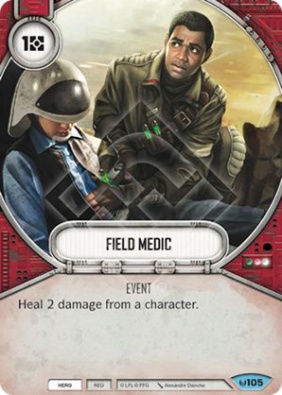 For dice control we have Easy Pickings, Automated Defense, and a single Hidden Motive.  Pickings is obviously broken, and Automated Defense is on 100% of the time, so they’re both no-brainers, while Hidden is included simply because I wanted a 0 drop in my list to make my top cut opponents consider it when I had 0 resources and my other cards would be offline.  Pacify runs the line between damage prevention/heal and removal, and is definitely worth the include as its often simply a free removal into max shields Rey, and at other times will remove your worst roll for +2 shields into indirect decks.  In addition we have Field Medic and Riot Shields for more HP based defensive cards.  The prevalence of indirect decks (ewoks and aphra) as well as action cheat decks (Han droids), led to wanting to include plenty of HP based control, and they payed dividends in the tournament.  I should also mention that Riot Shield is great for overwriting and cycling Salvaged Arms.  Off the Sensors has to be mentioned here, as while it always functions as an action cheat, its ability to remove Scoundrel dice is relevant into many top decks due to cards like Entourage, Fickle, Han, Jabba, Aphra, etc.  Side note: the resolving for +1 with Off the Sensors can also be incredibly strong when combined with Salvaged Arms to discard for 3+ cards or even snipe characters unexpectedly.  Finally, we have Convergence, which was an incredibly clutch tech card throughout the tournament.  Combined with the initial 2 disrupt, blowing up a 3 drop round one into decks like Villain Supports or Satine Droids is huge.  It can also be clutch for removing Target Acquired into ewoks, and is absolutely hilarious when used to blow up a Chewy’s Blaster, as your opponent just dealt themselves one damage for nothing. 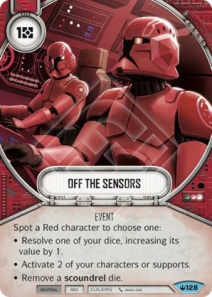 For action cheats we have DDO, Sieze the Day, Off the Sensors, and a single instigate.  DDO is an absolute no-brainer, and feels amazing each time you draw it.  Off the Sensors gets the job done round 1 as a double disrupt play, but earns its slot through its versatility, while Instigate is simply a solid cheat.  Sieze the Day, while often offline, is worth it as when it’s combined with DDO or Off the Sensors, allows you to combine R2s auto focus with a 3PO pump to guarantee a double or triple focus play (R2 turns to a focus, 3po pumps, or if you have a salvaged arm and grappling arm on chopper, you can pump the grappling arms focus with both 3PO and salvaged) that can then be immediately resolved for anywhere from 4-10+ melee damage.  I should mention that all of these can be used for an instant 2 disrupt, but keep in mind it is less necessary to cheat the disrupt into support decks that typically don’t spend their resources with their first actions.

How Good is It?

With all this said, I really believe it could be the best droids version for the current meta.  I want to try fitting in Scruffy for Villain supports and ewoks, but other than that I don’t believe there’s much that needs to be changed in the list.  My one caution is that part of our success may have been due to people not having experience into the deck, and I could be over estimating because of this.

Chopper droids is a great deck, and should definitely make an appearance at Nova.  I hope you’ve enjoyed the read, and feel free to ask any questions you may have.  Now go out there and have some fun with the Metal Menace!