Today I’m going to be taking a look at the sorry state of Aphra.  I’m not a statistics person, so I don’t often follow all the meta results looking for which deck is doing best and such.  With that said take the following with a grain of salt, it appears that Aphra lists are overall underperforming in the current meta.  I believe I know why.  It all stems from the fact that the most common Aphra list, Grievous Sentinel Aphra, is the wrong Aphra deck to run. Why is that? And what should we run instead?  Keep reading to find out.

Why is Grievous Sentinel Aphra the wrong choice?

I just want to say this to hopefully quell all the comments defending the list, YES ITS A GOOD DECK.  It’s rainbow, and thus has access to all the great cards, has efficient characters, card draw, a bit of resource gen, etc.  However, the deck IS NOT BROKEN ENOUGH.  Aphra is a highly efficient character, offering card draw and a bit of resource gen, but she’s not broken.  However, her efficiency has great potential to help other broken characters.  The problem is Grievous Sentinel is not broken.  You have to assume that with Grievous having the reduced cost effect, FFG balanced him to be roughly 1 to 1.5 points over-costed.  This means in order to make his ability point efficient, you want at least 2 droids, potentially 3, to be run with him to break that aspect of his character.  However, in this list you are only running a single droid in addition to Grievous.  Thus all you’re left with is 3 efficient characters paired together.  This is not a recipe for greatness in a meta filled with broken characters (Snoke, Watto, Wat, Palp + Storm, etc.).

What should we run instead?

Lets get straight to the point, we need to run Aphra with broken characters.  I’ll suggest 2 such characters, Wat and Watto.  Both are great in support oriented decks, and can run the Entourage package well.  Entourage is a great card, particularly with Aphra, who is both a scoundrel, and whose card draw synergizes with the card draw of Entourage.  Between Aphra and Entourage, you should easily find your key cards each game (Entourage, BT and 0-0-0).

There’s no doubt that Watto’s resource gen is insane.  He essentially offers 2 resources a round, with the potential for a third every once in a while.  You have a ton of yellow pay sides in the deck, so Rendezvous becomes an extremely solid card, either as a Logistics on Wattos 2 for 1, or as unexpected damage from dice your opponent didn’t think you could resolve.  While you lack natural focus, you make up for this by running ID-10s and Senate Chambers, hopefully this allows you to make solid use of your Entourage dice.  In any case, between Aphra getting 2 ability procs, Watto giving you 2 resources each round, and a few random other dice rolling resources, you’re looking at 12 + resources worth of supports hitting the board by the end of round 2.  Thats two Entourages, 0-0-0, BT-1, and a couple 1 cost Scoundrel supports by round 2.  Overall, the goal of the list is to break the game through card draw + crazy resource gen to create a consistent round 2 crazy board state.

Wat Aphra FOST (either one can be run elite) 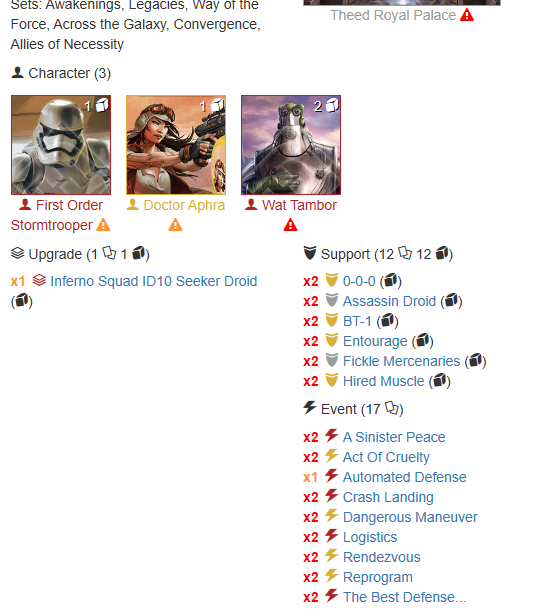 Wat is similar to Watto, offering solid resource gen, if slightly less reliably.  However, he makes up for this with his Focus, and his double use of supports.  In this list he’s quite effective with either Entourage or Assasin droid, but in a pinch double use of either of the droids, or even a Fickle Mercenary, is going to produce solid results. You can choose to run either elite, but I prefer eWat as it offers a much more aggressive playstyle, going for the additional focus and resource gen, double using the dice early in the game to go for quick kills and ramp.  The single die Wat version would allow for running Megablasters + imperial officer, as it becomes less likely they’ll target Wat first.  In any case, the goal of the list is to break the game once again through card draw guaranteeing the specific supports you want to drop early, and getting double uses out of a couple broken supports round 1 and 2 to get that early game edge over your opponent.

I don’t need to explain this pairing as most will be familiar with it by now.  While I’m not convinced its tier 1 at the moment, I still think it has a better chance at BREAKING the game than the Grievous Sentinel version.  If someone can manage to craft a list that consistently secures a kill round 2 and again on round 3 (into three wides), then you’re looking at the Executioners being essentially 8 cost ELITE characters rounds two and three.  That’s a crap ton of value for 8. 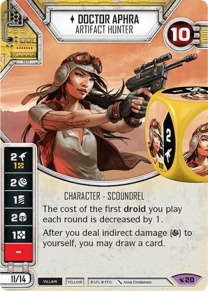 I have only been able to play a few games with these lists, and really have no clue what their overall power level is.  However, I hope I’ve convinced the Destiny Community at large to stop playing the Grievous Sentinel Aphra list, which I believe to be an efficient deck doomed to tier 1.5 by the broken nature of other lists.  If instead we all start trying lists that contain truly BROKEN mechanics, then I believe we’ll eventually find an Aphra deck that can be called a top tier 1 deck.