Before Worlds 2018, support decks and upgrade decks had largely been kept separate. Then the Hyperloops brought out Drive By Shooting, a deck that combined the most efficient vehicles with the most efficient upgrades. Since then, support decks have continued to sprinkle in powerful upgrades (like Handheld Cannon), understanding that the more above the curve cards you can include in your deck, the better. As I’ve been theory crafting Convergence, I’ve noticed that my Middle/Middle decks have trended in a similar direction – they all seemed to be including Megablaster Troopers. We’ve reached a point where a number of the most efficient cards are supports and the pool of good upgrades is shallow. So my thesis is this – for Middle/Middle decks to rise to the top in the current meta, they need to find ways to include powerful supports, while still operating in a way that is different from the traditional 3-wide ramp support decks. The following are 3 examples of how this can be done.

This deck is built for speed and surprise damage. Military Camp + Tactical Mastery/Seize the Day can lead into some pretty big spikes of damage off of action cheating. A deck like this that can get it’s dice into the pool quickly in a round has the advantage of being able to take an opponent’s characters off of the board before they can use them. In a meta full of indirect damage and supports, we sometimes forget how big of a swing this can be. The evolution of this style of deck is the inclusion of Megablaster Troopers instead of 3 drop upgrades. This also gives the deck the ability to go into late game with a pile of dice that do not go away – a trick normally seen in wide support decks. And Megablaster Troopers doesn’t actually slow the deck down much, as it essentially acts as 1 big character. Thus, the deck is able take advantage of speed, while also using it’s resources on the most efficient available cards.

Talzin/Beckett – Calling in the Fist

This is a deck we saw pop up in the last meta, and it’s a pretty good example of this revolution of the middle/middle pairing. While not super fast like the last deck, this deck is able to maintain a faster speed than support decks and get its dice into the pool quicker. This is an advantage by itself, but this also means you can take advantage of more powerful battlefields, in this case Rift Valley (Salt Flats could also be a good choice here). But again, instead of filling out the upgrade suite with a couple more mediocre cards, this deck goes a different route – Vader’s Fist. The ability to slam down a Vader’s Fist increases the potential damage output of this deck by a lot, and like the last deck, helps it to maintain a higher damage potential late into the game. So we see a deck that is able to take advantage of some of the benefits of a faster pace, while also using it’s resources on the most powerful support in the game.

Lando/Biggs – AR as a 3rd character 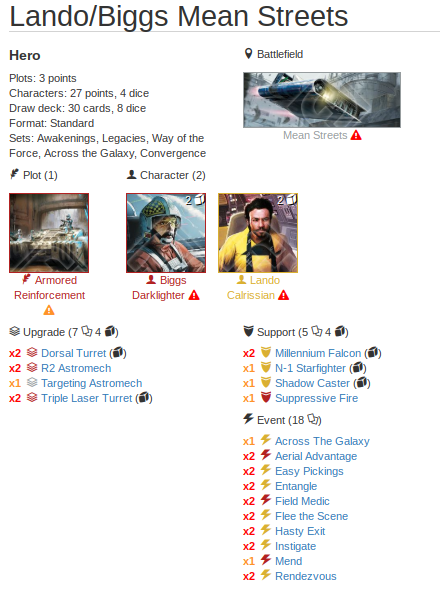 In this 3rd example, we see another adaptation to way we play 2-wides, this time using AR to call in what essentially ends up being a 3rd character (this idea saw it’s first iteration in Han/Biggs during the ATG meta). Though it doesn’t abuse Shadow Caster quite as well as the 3-wide versions of AR, this version does have the advantage of speed and surprise damage. Biggs (and the Falcon, should you play it) helps to maintain your speed, allowing you to take advantage of an exceedingly powerful battlefield in Mean Streets (a big roll off and the inclusion of Across the Galaxy help to guarantee the battlefield). A couple surprise plays in Instigate (really brutal with Biggs) and Lando’s PA to play the Falcon (which then activates, activates Biggs, who activates Shadow Caster, and provides an extra ambush action to resolve dice) give the deck opportunities to burst down characters early in the round. So then, this deck tries to take advantage of the powerful Shadow Caster (resetting it when able), while playing at a speed that allows it to get early round kills and abuse a powerful battlefield.

These are just a few examples, but they serve to highlight the direction I believe middle middle pairings should go. We can’t escape the fact that some of the best cards in the game are supports, and that upgrade suites are not currently strong enough to support Tier 1 decks. So archetypes that have traditional been upgrade-centric need to find ways to include powerful supports. Yet, without the big health pools and consistent ramp of 3-wide support decks, they cannot win by imitating the plodding play style that support decks typically employ. So they also need to take advantage of what they can do that 3-wide support decks cannot – getting damage dice into the pool earlier in the round, getting better use out of powerful battlefields, and taking advantage of potential action cheating plays.