In a world in which Destiny has become saturated with amazing supports like Vader’s Fist, Megablaster Troopers, and Entourage, slow support decks have become the norm. How do faster 2-wide decks compete in this kind of meta? One of the most important ways a faster deck can gain an advantage over slow support decks is by abusing a powerful battlefield. In the past, battlefields like Frozen Wastes and Emperor’s Throne Room have been some of the few that gave fast decks a distinct advantage. With those battlefields rotating, where can we turn going forward? The answer, I think, is Mean Streets.

Why is this battlefield so strong? Like Theed Royal Palace before it, this battlefield gives you a distinct resource advantage if you are maintaining control of the battlefield. Its use is much more narrow, but it actually has a higher upside than Theed if you continue to claim first. Early in the game, it allows you to play control that you might not otherwise be able to afford, while late in the game it can allow you to play expensive, powerful events for free. Early testing with this battlefield has found it to be extremely powerful, a battlefield easily worth taking over shields. In the rest of this article, I’m going to go over some of the best events and characters for taking advantage of this battlefield.

I mention Flee the Scene in it’s own category, because it is God tier level with Mean Streets. Removing any 2 dice for free with no downside? Get wrecked. 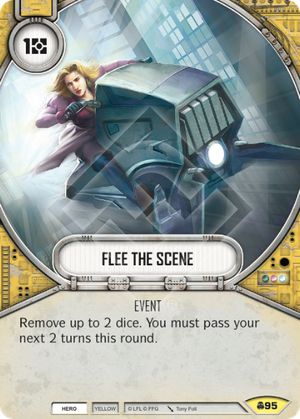 Some damage dealing events can also be pretty brutal when played with Mean Streets. As an example, how good does claiming for a free Scorched Earth sound, particularly against Palpatine? Below are some of the best offensive events for Mean Streets:

Those certainly aren’t all the cards that are good with Mean Streets, but hopefully that gives you a good idea of what events to include in a Mean Streets deck. It’s important to note that you shouldn’t just shove your deck full of expensive events, because you want to still have a reasonable curve if you don’t win the battlefield roll off. Finding the correct balance of cards is crucial to building a Mean Streets deck that crushes when you play on your battlefield, but still functions well without it.

Of course, to pull off this strategy you need to have a scoundrel available, at least at the beginning of the game. Below is a list of scoundrels, of which I will pick out a few that I think are worth mentioning in particular:

Out of those list of Scoundrels, there are quite a few that could be good with Mean Streets, but 2 in particular stand out: DJ and Qi’Ra. DJ stands out, because he will benefit a lot from being able to play big removal events for free. Claiming for free Entangles and Into the Crosshairs sounds extremely good with DJ. Qi’Ra stands out because of her ability to bring Flee the Scene into villain decks. This alone makes her worth considering as a partner for her 14 point Villain counterparts.

Hopefully, this article gives you a good idea of how Mean Streets could be used to it’s fullest potential. I’ve already found Padme/Leia3 to be extremely deadly with the battlefield, and I expect to find more pairings that can abuse it as time goes on. I love speedy decks that like to abuse claim abilities, and I’m looking forward to exploring this battlefield further!