Today’s post is a tournament report by Russell Lindberg, who was the finalist at the North Carolina Regional. The deck he played – Yoda/Han – is one I’ve thought could be great ever since the announcement of the new Han. I haven’t had much chance to try the deck myself, so I was excited when he decided to play the deck, and especially excited to see him perform so well! I hope you enjoy his tournament report. 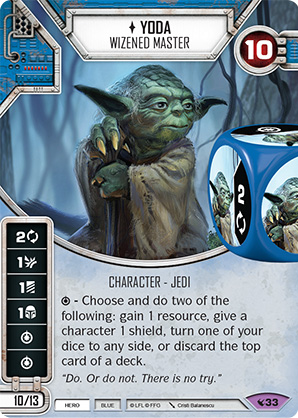 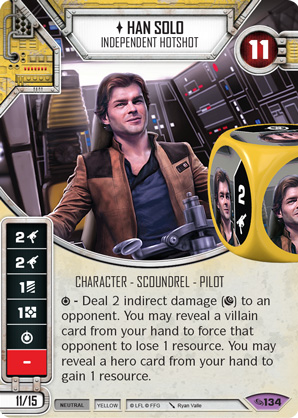 I was at a loss going into the Regional Season for Destiny.  I hadn’t gotten to play much since Gen Con because of work, but my theory-crafting before Across the Galaxy released led me to Thrawn Snoke (guess I wasn’t alone). Then once regionals started, it became apparent how strong Thrawn Snoke was, and I am one of those players that never wants to play the top known deck going into an event.

So I talked with Jon Magnuson, and he suggested I try out Poe1/Anakin2 with Armored Reinforcement.  This deck was really cool, allowing Poe to throw N-1 Starfighters and Rocket Launchers to blow up problematic vehicles. When I took it to locals, it was crushing everything… until it ran into Thrawn/Snoke.  The biggest problem was that Vader’s Fist is not a vehicle, and the deck still had no way to get rid of it.

Then the nerfs happened, and most people went back to the drawing board for the first regionals post Balance of the Force.  I was still unsure on Poe/Anakin, and went to the Destiny Council for advice, only to find out they were all playing different decks. I had just traded for a Han3 at locals, and Luke mentioned Han3/Yoda as an option for him.

I quickly drafted up a list that was similar to the Yoda/Cassian list that several of us played at Gen Con, and sent it to them for advice. The biggest, and most important cards that they suggested were Force Throw and Drop In (which I didn’t even know existed before they mentioned it). A few personal tweaks including a last minute Vandalize as the 30th card, and this list was born. 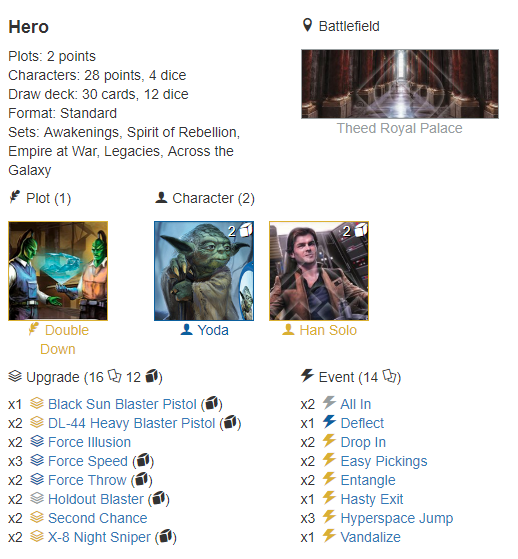 NC is my home state, and our community has grown since Across the Galaxy released, thanks to people like John Coussis (our T.O. for the regional) and Ryan Mahon (the community leader for the Raleigh area). That, combined with a strong presence from the Virginia area, led to a strong 49 player turnout. We would be playing 7 rounds with a cut to the top 8.

I used my Store Champ bye this round, along with 4 others, and got to relax and scope out the field. I saw a lot of Jyn/Cassian, Kylo decks, a few Vader3 lists, and only a couple Thrawn/Snoke. It really was a whole new meta.

This was a very long game against my friend Cole. He was able to mill my deck very quickly, and before I knew it was down to only 4 cards in hand. However, Leia went down preventing him from having many discard options.  My last minute addition of Vandalize was clutch here, getting rid of C3PO and preventing Lando from ditching my hand. Double Force Throw on Yoda was a nightmare for Lando, and eventually closed out the game.

I was playing against Todd from the Knights of Ren, and this round my lack of testing with the deck, sleep, and knowledge about what I was up against almost cost me.  After an early game Falcon into Hit and Run, I soon found that I was facing a pile of dice before I even got to roll out. I made a couple of really embarrassing mistakes this game. I misread Drop In, thinking it just required me to control the battlefield to use, not realizing I had to be on my battlefield. I also started special chaining thinking I had a Force Speed out and tried to resolve multiple actions, but luckily Todd realized it and stopped me. Even with all of that happening, I still had a strong start on my side and a couple X-8 Night Snipers helped me close out a close game.

Everything came together this game for me and nothing went right for my opponent. I won the battlefield, had multiple guns on Han, and my opponent mulliganed all 5 cards and failed to find an upgrade for a couple rounds. The game was over by round 3 or 4. I was starting to really get the hang of playing the deck at this point.

Going into this round, there were 3 undefeated players remaining and I had the best tiebreakers. However, I was paired down again against a really strong opponent.  Everything went wrong for me this game. I lost the battlefield roll, and my opponent found the Force Speed for Yoda, while I did not. Han was down before I knew what hit him, and with Yoda facing down an army of special dice, I conceded.

I was playing against a really nice local player named Matt.  I didn’t really know what to expect from this pairing, and I’m pretty sure this was the most unique list that made the top 8.  I knew from my previous match with Lando that I really wanted to see a Force Throw in my opener, and luckily I hit it, only to run into Vandalize.  He also won the battlefield roll and was playing Landing Dock, which was a surprising counter to my speedy deck. It turned out to be a pretty interesting vehicle list with Shadow Caster, N-1 Starfighter, and Smuggling Freighter of all things. In the end, multiple Hyperspace Jumps, a Second Chance on Han, and a Force Illusion on Yoda was just too much for him to overcome.

At this point I sat in 4th place, and my opponent Shawn sat in 5th place. We were sitting at table 2 and realized that no matter what the outcome we should both make top 8. So we just decided to play for fun. Unfortunately for Shawn, this game ended up being very one sided. We both had a strong round 1, with a gun on Han and a Force Speed on Yoda on my side, and a Vader’s Lightsaber on his side. Rounds 2 and 3 were rough for him though, with me pinging Vader for some damage, and then Hyperspace Jumping away before he could resolve any of his damage. Then round 4 I used Drop In to roll in Yoda, used Force Speed to roll in Han, and played All In to hit Vader for 11, exactly enough to finish him.

I entered the top 8 as the 3rd seed, and got a rematch with Matt and his interesting vehicle list.

Game 1: I won the battlefield roll I believe, which was huge considering how annoying Landing Dock was in our first match. This first game was a real grind, with me having to mill 9 cards to stop a big indirect damage swing from Shadowcaster. Ultimately it paid off, and I was able to stay alive long enough to finish off his remaining Lando before his Shadowcaster got me.

Game 2: This game was strange. He got to play on his battlefield, which was rough for me.  Ultimately though this game came down to a crucial turn where I decided to Vandalize his Shadowcaster instead of dealing damage to his characters. After that, Wedge rolled out a lot of indirect damage over several rounds, and I couldn’t keep up.

Game 3: I had a really strong start to this game on my battlefield, and even after he Vandalized a Force Throw and Force Speed, I was able to play around his damage with Hyperspace Jump and gun down his characters with Han.

Another rematch, this time against my only loss of the tournament so far, so I wasn’t feeling too optimistic about my chances going into it.

Game 1: This was probably the craziest match of the tournament for me. He got off to a pretty strong start, and before I knew it I was down to Han with a Second Chance and a couple guns versus both of his characters. Luckily, with just one character I was able to outpace him, and my specials helped me to pay off Hondo after I finished off Yoda.  My guns were able to deal more damage than his Lightbow as well, and I was able to comeback to win game 1.

Game 2: I had a really strong start to this game. Even though he was playing on Obi Wan’s Hut, I started with 2 Force Speeds on Yoda and his Yoda went down quickly. Unfortunately for him, he didn’t really get the upgrades he needed for Hondo, and with me gaining resources from both Yoda and Han’s dice it was difficult for him to deal any damage.

Dustin piloted this deck extremely well, and did a great write up about our finals match here: http://swdestinydb.com/decklist/view/25509/ncregionalchampion12-2inthetournament-1.0

Just to kind of piggy back off his recap, I think the key really was losing the opening battlefield roll, as each of us won the game we started with our battlefield. My main goal in this match was to try to mulligan for Force Throw to combat his Shadowcaster. In game 1, I actually got the Force Throw, but he managed to play around it every time I rolled it out. Game 2, the combination of starting with my battlefield, 2 Force Speeds on Yoda, and a couple of Hyperspace Jumps made it a fairly quick game. Game 3 started out ok with a Force Speed on Yoda, only to run into Vandalize. It was all downhill from there, as Han fell to the Shadowcaster round 3, and I couldn’t really recover.

Overall I was very pleased with the deck. I was basically learning the deck as the day went along, and it can do some really unfair and oppressive things.  Several people asked me about my Double Down choices of Force Speed and Hyperspace Jump, and if I would choose other cards after the tournament. Honestly I wouldn’t change either.  Getting Force Speed on Yoda in your opening hand allows you to set up some crazy plays with Drop In into All In in the later rounds. Hyperspace Jump is so crucial when your opponent has an insane roll that you usually want it any round after the first.

Many thanks to the Destiny Council for helping me with the decklist, John Coussis for lending me the cards to play the deck, and the great Star Wars Destiny community that attended the NC Regional.