As the current meta has moved more and more towards indirect damage, with Aphra’s murder droids and Planetary Bombardments hitting the table left and right, I’ve started to consider what cards might be good additions to decks. Cards that might be difficult to play or use effectively when your characters are being cut down quickly by direct damage, but that become more effective when your full cast of characters is surviving longer into the game. One of the first cards that came to mind was The Power of the Force. 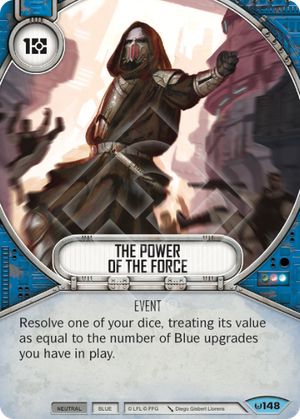 The Power of the Force has always had a high upside, but it was difficult to pull off in previous metas, where two character lists and direct damage dominated. When one of your two characters is off the board by round two in most games, it is difficult to use this card for more than three, limiting it’s effectiveness. But now that we’re seeing more  and more indirect focused decks (and mill), and the death of the first character typically comes later in the game, it becomes possible to use this card for much higher value. Once four or more blue upgrades hit the table the value from this card is tremendous. The following die sides are the best suited for this card:

With this in mind, I set out to create some decks that could abuse The Power of the Force. Here is what I came up with:

Rey1 is here instead of Rey2 primarily because of the increased ramp potential. Starting with Profitable Connections allows us to ramp into more upgrades quickly, turning on the Power of the Force earlier in the game (Rey1’s multiple resource sides also help with this). We have a discard side on Rey, a focus side on Luke, and plenty of base melee sides of value 2 or less scattered throughout the deck, leaving us with plenty of potential options for a blowout play with The Power of the Force. A99 Aquata Breather is a cute card here, as it gives us another 0 cost blue upgrade and is quite useful into some of the current meta decks. Comm Tower is also a nice addition with the switch to Rey1, as I really believe that for 2 character decks to thrive in the current meta they need to make good use of a powerful battlefield; Comm Tower is a better option in that regard than Obi-Wan’s Hut. 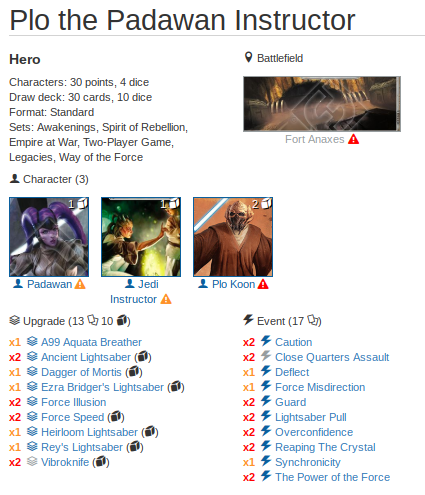 This was a deck I was first introduced to when it crushed me at a local, and I think it does a lot of interesting things. While Jedi Instructor is pretty bad and her ability doesn’t do much on her, the ability is actually quite good on Plo. It turns Plo into a poor man’s Dooku – as long as he rolls 1 melee side you’re getting another. So while the upside is lower than Plo/Padawans, the consistency is higher and it boasts a higher health pool. I don’t know if it’s ultimately better, but I am intrigued and it is the ideal deck for The Power of the Force (though, to be fair, Plo/Padawans is also a great deck for The Power of the Force). Between Plo, Padawan, and the three 0 cost upgrades, you can pretty quickly put out 5-6 upgrades on your characters, turning on some massive The Power of the Force plays. Indeed, in the limited reps I have gotten with the deck I have pulled it off for 5+ in every single game. Additionally, Jedi Instructor and Padawan make ideal targets for the card, as most of their sides are not threatening enough to remove on their own, and the 1 damage sides and 1 focus sides can be absolutely brutal when turned into 6.

So there you have it. These are just some introductory attempts at these particular decks, but I hope they give you a good idea of what might be possible with The Power of the Force in the current meta. I intend to keep testing these decks in the coming months to see how they hold up against some of the top decks. Happy testing!