Early results from the Way of the Force meta are in, and it appears we are living in a 3-wide meta – 12 of the top 16 decks from UK Nationals last weekend were 3-wides, leaving no doubt that wider decks have taken over the meta. This leaves effects that trigger after character deaths in a great spot. Previous cards like Aftermath and Bala-Tik should pick up more value in this meta, and I expect them to start to see more play. But there’s an additional card that triggers after death, one that more recently came onto the destiny scene – the Executioner. The Executioner has been overlooked thus far, seen as a pretty average non-unique character, similar to a FOST but costing 1 additional point. But with the meta in 3-wide mode, the Executioner suddenly becomes a lot more spicy, with opportunities for multiple procs of the passive in a game. As such, we’ve been exploring some builds including Executioners in the lead-up to NOVA, and are excited to share them with you. Hope you enjoy! 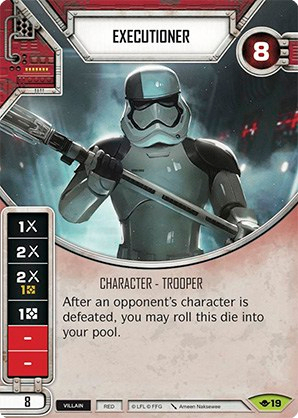 This is an interesting combination that we’ve had a lot of success with lately (Brian won a store championship with the above list. See the video at the bottom of the article for a recap his win). Aphra has seen some success with the introduction of 0-0-0 in Way of the Force, finding her way into top 16s at a couple of major tournaments. She brings a lot to the table, helping your ramp by decreasing the cost of the droids, and bringing your engine online early with the card draw. Aphra decks tend to be great against 2-wides, overwhelming them with indirect damage, but can struggle more against 3-wides, where the indirect damage is less impactful. Double Executioner, on the other hand, brings a lot to the table in 3-wide matchups, where they are able to proc early and often, adding a lot of extra potential damage. In this way, the Executioners help to mitigate a weakness of Aphra decks. Double Executioner also allows you to bring in Emulate, a card many of you probably haven’t heard of, but that’s quite effective in the deck. Focus for 0 is good. (Note: it’s not a spot requirement, so this can also work with your opponents characters. I’ve found it particularly useful into Talzin/Mandos as a form of soft control if they kill one of your Executioners before you can use it). Last card I’d like to mention here is Relentless Pursuit, which can turn your indirect damage into direct damage, maneuver around shields and Force Illusion, and can proc your Executioners when your opponent isn’t expecting it. The deck can compete with mill, as well as with the plethora of 3-wide vehicle decks we’ve been seeing lately, and is really fun to play. This isn’t a refined list, but we feel that with a little tinkering the deck is good enough to be in the tier 1.5 range, maybe even better depending on the meta. Be sure to give it a shot! I promise that at the very least you’ll enjoy playing the deck ;).

Featured in a previous article, Snoke’s Solar Sailer is an extremely strong deck, at least in my opinion. The deck can crush any damage deck that can’t burst from 0 to dead in a round, as the healing effects of Rise Again and Witch Magick will crush decks that deal damage in small increments. It relies on Talzin’s consistency for early resources with Snokes PA, and plays efficient 3 cost dice, whether redeploys or vehicles.  You may think that Ciena would fit the list better than the Executioner, but you’d be wrong.  A consistent problem with 2-Snokeable die decks is that opponents can shut off the PA if they have the control.  Especially once one of those dice has died.  Executioner’s passive can come in clutch for allowing you to get the value from the Snoke PA.  They may control both the Talzin and the Executioner die in a mid-game round, but provided you have enough supports and weapons to finish off a character, that Executioner die that rolls in can be Snoked.  This can mean an additional 3-4 damage, or another 3 resources that can be used for another support or to help afford a Rise Again that brings the game completely out of reach for the opponent.  This makes Executioner the best choice to fill out the red slot.  Side note: his die also supports Grevious’ Wheel Bike, and that support can be nuts with the Focus sides from Snoke, allowing you to resolve 6 damage for 1 resource, at least in theory.  As stated previously, the deck is extremely good into damage, as it makes great use of Rise Again, having 2 targets and plenty of resource gen.  However, the deck can struggle into the 3 wide mill.  If you are considering the deck, you’ll need to modify the list to help the mill match, with cards like Tactical Mastery to help you get around your opponents control.

Finally we have a deck that remains relatively untested, but could in theory be a decent aggro deck. Once again, we feature the double Executioner to allow for Emulates to see play.  This time however, we’re running with Snoke to try and push the early game with 4 damage Snoke PAs. An incredibly funny aspect of this list is the fact that Training is insanely good with Snoke, as the extra die from the upgrade is a legal Snoke target.  A round one Training is key for preventing control heavy decks from controlling all of your Snokeable dice. In addition, the Force Speed is also meant to protect the Executioner dice from being controlled.  The deck doesn’t run many defensive cards, instead relying on the old classic of Aftermath + Endless Ranks, with Snoke PA on resources also helping afford the Endless Ranks, to simply outlast your opponent. Anger is also in theory hilariously good with the two blank sides of the Executioners in the current meta.  Your opponent rolls that 7 indirect on the Planetary?  Lets just use a 0 cost card to create a 14 point damage swing, sounds nice (yeah yeah, I know its inconsistent).  In any case, if the deck manages to get an early kill, you’re looking at a strong snowball mechanic with the Executioner procs together with Snoke’s focus sides.

So there you have it, Executioners are worth trying in the current three wide meta, and we’ve given you several decks to give them a shot with. Hope you enjoy them, and good luck to everyone competing at Nova this weekend!

P.S. Here’s a video where we talk with Brian about his SC win.

Posted In: Exploring Way of the Force