While Yoda Cassian quickly popped up as an extremely fast mill deck, it took time for people to consider the fact that it could also deal damage.  We’ve been keeping this deck in the background for awhile now, as the Council was considering bringing it to Gen Con.  And indeed, Will, Andrew, and Brian all brought Yoda Cassian damage, even Brian’s brother Russel brought the deck.  Andrew and Brian both made top 16, while Will and Russel ended day one at 5-3, narrowly missing the 6-2 cut. So what is it that made us want to play the deck? Let’s find out.

(Clarification: the article talks about the origin and theory behind the deck.  See the Video at the end of the article for a more in depth strategy discussion, as well as a talk on Gen Con.) 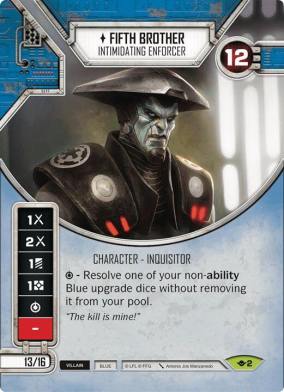 The origins of this deck begin with Luke’s Fifth Brother Snoke deck.  While the deck fell apart on a technicality, (a rule that prevents infinite special re-roll effects in a single action also killed All In for Fifth), the deck brought back to my mind just how potent All In can be in the right deck.  In Awakenings, at the first Worlds, All In was a huge part of the Poe Rey deck that Brian and I brought to top 16 finishes.  Together with the single focus on Robes and Com Link, and having a One With The Force in hand, you could:

What is attractive about this style of play is that it can crush opponents irregardless of their skill.  Even if they are aware of the combo, they can at most choose to remove the focus dice, but that leaves less control for the truly threatening dice anyway. (Side note: hand control also works i.e. FILP).  Beyond the difficulty of stopping the combo, being able to deal damage first in a round to secure a kill before a character can make use of its dice is a huge deal.  Especially against decks with a key character, like Kylo + X, killing before the character does damage on round 2 or 3 will secure a win. 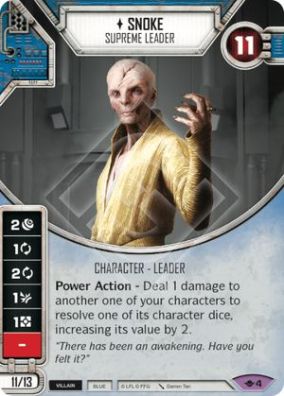 So, as my brother began to crush me with All In plays, I began thinking, “Who can run All In most effectively”.  Turns out there are 2 stand outs, one character for both hero and villain, that utilize All In well and are tier 1: Yoda for hero, Snoke for villain.  Both have at least a single focus (Yoda has two) in addition to a double focus.  This means that as long as you hit at least one focus, you can go focus -> double focus -> 2 sides of choice. This isn’t the only aspect that makes these two such great All In characters.  The true kicker is Force Speed, which allows them to roll out their major character’s dice and immediately play All In with no interference. There are a few other All In options, i.e. Poe 2 for heroes, but in addition to the Force Speed shenanigans, a huge benefit to Snoke and Yoda is that they are cheap enough to allow for strong sides on the character they are paired with (there’s something worth focusing to).

Once I settled on Yoda as an option, I began looking at possible pairings, but ultimately settled on Cassian for a few reasons.  First, his 2-damage sides effectively deal 3 damage, and are worth focusing to.  Second, and perhaps more importantly, Cassian has access to Second Chance which allows you to keep him alive longer than other characters.  If you try to run a support + major character you can often have that character die too early, and the game is lost.  Second Chance, in addition to Force Illusion, helps ensure Cassian survives for long enough to win the game.

With it settled that I would try Cassian, I figured I’d go ahead and add in another option, besides Force Speed, that can protect his dice and settled on a Quick Draw suite.  And in addition to All In I added Impulsive.  While this takes up a large number of cards, it also dramatically increases your chances of drawing the cards necessary for pulling off an early damage play.

I threw together the deck and played it a few times and man, I was happy.  In almost 50% of games it was instant killing a character on round 2, with the rest of games instead having it happen round 3.  As the Council continued testing, we suspected that we’d hit the jack pot, a deck that could reliably snipe characters.  Now, that didn’t necessarily mean we’d discovered a tier 0 deck, as sniping characters isn’t that amazing against certain decks (i.e. 3 wide mill and vehicles).  However, those match-ups were still winnable.  Cards like Hyperspace Jump and the simple fact that Cassian’s dice can deal 6 damage allowed for victories against the high health lists. 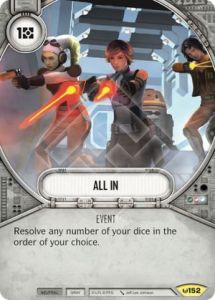 And so, to cut a long story short, the Council ended up going “All In” on Yoda Cassian damage. We had no illusions about the deck being some unstoppable force.  It has a low HP pool and thus is vulnerable to early “god-rolls” and it’s main game plan wasn’t as effective against three wides.  But even so, the deck had enough “broken” aspects to make it appealing as a deck choice.

Here is our core list for the deck, you can fill out the rest of the cards with your personal favorites.

And here are some suggestions: 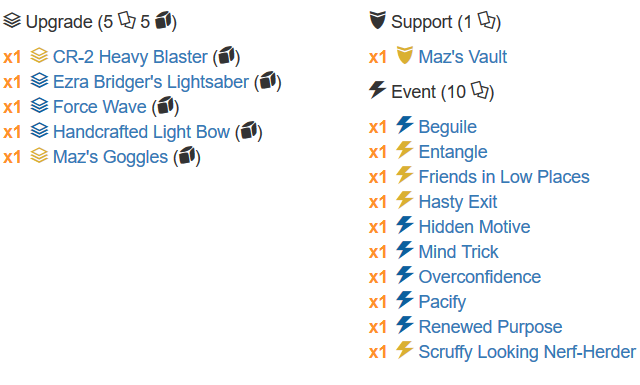 From the suggestions you can take 1-2 more upgrades, and then round out your deck with your preferred control options.

Hope you all go ahead and give the deck a shot.  It’s fun to play, and can do some nasty things. Be sure to let us know what you think of the deck.

Moving on, here’s the list that Brian played at Gen Con:

Watch this video in which I chat with Brian and go in depth on the strategies of the deck and his Gen Con experience. (Sorry for the technical difficulties!)