We will leave the rest of the article up as a token to the importance of carefully considering rules interactions before publicly talking up a deck ;).

It’s early in the Way of the Force meta, and we have been exploring decks like crazy. One of the decks that has come up recently as a contender is Fifth Brother / Snoke, a deck with which Jon won a recent store championship (decklist found here). Today, we’re going to take some time to explain the theory behind the deck, why it works, and why we think it might be a contender for Tier 1 status. At the end, Jon answers the question we know you’re already asking: isn’t Kylo2 just better than Fifth Brother? 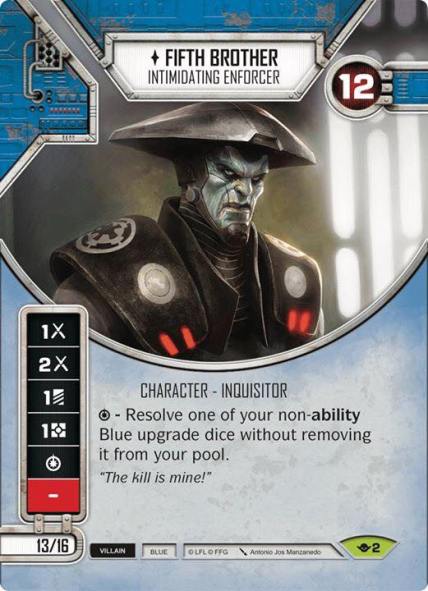 Fifth Brother has gotten little attention at this point in Way of the Force, and understandably so. He has good health, but his die seems mediocre – 2 damage sides and a clunky special. However, that clunky special has a very high upside, especially when combined with 5th Brother’s Lightsaber. With 5th Brother’s Lightsaber, that special can become 3 or 4 damage pretty easily. Even upgrades like Heirloom Lightsaber and Dagger of Mortis can make his special into a very good side for a 16 point character. This deck was crafted around the idea that if we can abuse Fifth Brother’s special, he goes from a mediocre character to an amazing one. 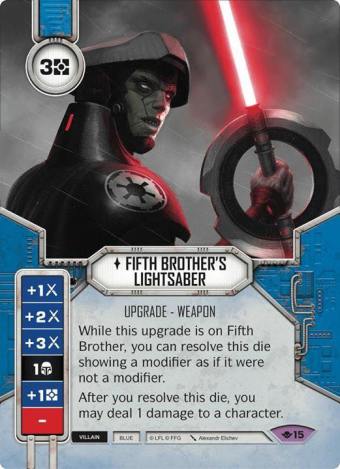 Snoke is getting a lot of play currently, and rightly so – his power action has amazing potential. It’s good when combined with damage, but the real power plays are using it on a discard side or a resource side. Discarding 3+ cards or gaining 3+ resources is amazing, especially early in the game. With both a discard and a resource side, Fifth Brother is an ideal candidate for Snoke’s power action. Additionally, Fifth Brother has 12 health, helping to mitigate the downside of Snoke’s power action. Snoke’s focus sides also make him an ideal partner for abusing Fifth Brother’s special, helping to guarantee the special gets paired up with big damage sides on the sabers.

So Snoke and Fifth Brother make pretty good partners for each other. But what really makes this deck a terror, is the power play: Force Speed + All In.

Snoke’s double focus is the engine that makes this play work. You often get to focus 2-3 sides off of this play, guaranteeing you hit the big sides on the sabers and hit Fifth Brother’s special at the same time, resolving them all for maximum damage. And the math adds up quickly. Put an Heirloom on the table and max damage is 9 off of those three dice. Put a Fifth Brother’s Lightsaber on the table and that number jumps up to 12(!). Put multiple sabers on the table and you can easily hit 15+ damage off of All In. If you activate Fifth Brother off of a Force Speed special, all of this becomes unmitigatable. This is the play that makes this deck so potent. And since you only need 1 saber to hit big damage, it’s not hard to pull it off on round two. Just to give you an idea of how massive these plays can be, in a game against a vehicle deck during the store championship this past weekend, Jon played All In on round three for 17 damage to kill both Rose and Ezra from full HP, then next turn did the same thing, killing Anakin through 2 shields and a Second Chance. Tough to beat that.

UPDATE: See the update at the beginning of this article. The All In play does not work in this particular combo, because of rules regarding resolving dice in the same action.

All in all, this was a fun deck to theory craft and is a fun deck to play. It has one of the biggest power plays in the game, and the upside with this deck is tremendous. I can’t emphasize enough how high the damage potential is – in one practice game I defeated a Kylo/Snoke deck on turn 2! However, a few questions remain to be asked before we can say that it’s Tier 1: Is the deck consistent enough, or is it too reliant on a few cards? And is it resilient enough, or are decks that can burst down Fifth Brother going to give this deck problems? Time will tell, but it’s definitely a powerful deck, and one we’ll be testing in the months to come.

See Jon’s recap of this weekend: