Next on our list is Tarkin Aphra.  Tarkin Aphra?  Why would you pair them you ask.  Well, you’ll soon find out. 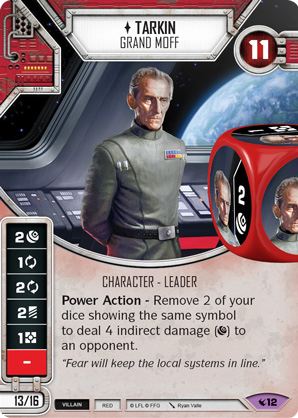 We’ll be running Docking Bay and we don’t have any room for Plots.  Let’s look at the list: 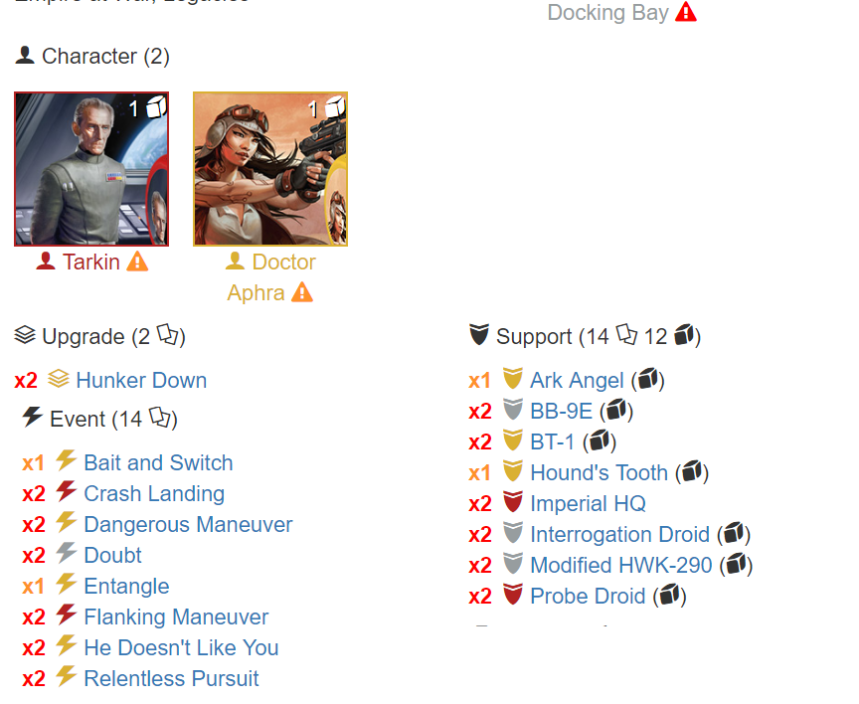 So why do I think these two will work well together?  Well, Tarkin likes to take small dice and turn them into 4 indirect while Aphra likes to spam the board with small droids.  Furthermore, they both have indirect on their dice, and even both have discard sides, so you could see some decent hand control with 3 discard in a single turn being a definite possibility.  The real questions are going to be how do we keep Tarkin alive long enough and how do we make sure we finish off a character as we are dealing high amounts of indirect damage. 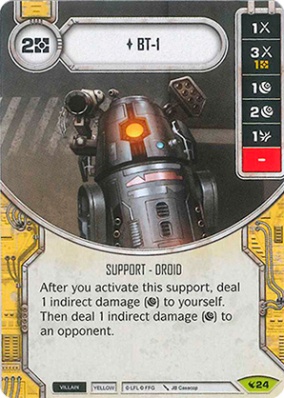 So let’s take a look at our supports.  For droids we have BB-9E, BT-1, Interrogation Droid, and Probe Droid.  Nothing too special there, obviously BT-1 is our dream, as it has great sides and also gives us a draw every turn.  We also shouldn’t underestimate Interrogation Droids and there ability to hit key events from our opponent’s hand. In addition to these droids we have an Ark Angel, a Hounds Tooth, and Modified HWK-290s.  Ark Angel is there because of its ability to really speed up our early turns.  Hounds Tooth seemed like too much of a potential shield gen to pass up, and Modified HWK is our potential late game damage boost, with it’s 2-3-3-4 sides.  Note that its downside does make us draw a card, which is a slight help in justifying running the card.  While we’re here I’m going to go ahead and mention the Imperial HQs.  While we only have a single pay side on our character dice, it is one of our only options for direct damage.  Tarkin has several focus sides, so it seems to me that if we get an HQ early, every time we get that focus we can make use of some direct damage.  In addition, several of our supports have pay sides, so I think we can justify running the card.

Looking at our removal, it’s rather lacking at the moment.  I’m entirely unsure what the resource curve of the deck needs to be, as I just don’t know what effect Aphra will have with the droids.  Once you’re more certain of how many resources you have available, add more 1 cost removal to the deck.  For now though, I tried to stick to 0 cost cards, theorizing they will synergize better with Aphra’s draw mechanic and allow us to buy every support we draw.  We have Crash Landing, Dangerous Maneuver, Doubt, He Doesn’t Like You, and Hunker Down.  It’s worth noting that both Crash Landing and Dangerous Maneuver deal indirect to yourself, and thus make you draw a card.  I also have a single Entangle, which costs a whopping 2.  However, in a special heavy meta, its restriction to 2 dice valuing up to 3 wont matter nearly as much, and is a great way to hit two of an opponents key special dice. 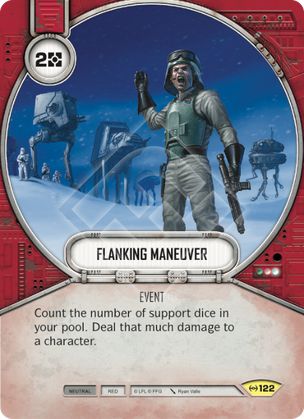 Our aggressive cards are quite fun.  We have a single Bait and Switch, which is intended to be used on Tarkin’s resources, to give us surprise 2-4 discards in combination with other dice.  In addition we have Relentless Pursuit and Flanking Maneuver.  These are the cards that will help us finish off characters despite our indirect damage.  Being able to pay 2 for 4+ damage turn 3 and on seems like it could really hurt.  Relentless Pursuit also seems like a solid way to surprise your opponent.  In any case, only testing will determine whether these cards are worth running.

So what do you think?  Can Aphra help swarm the board early enough to make use of Tarkin’s ability?  Will Flanking Maneuver be a clutch mid to late game play or will the deck just fall short?  Either way, it seems like a fun deck and a great way to try out 2 of Legacy’s more interesting characters.